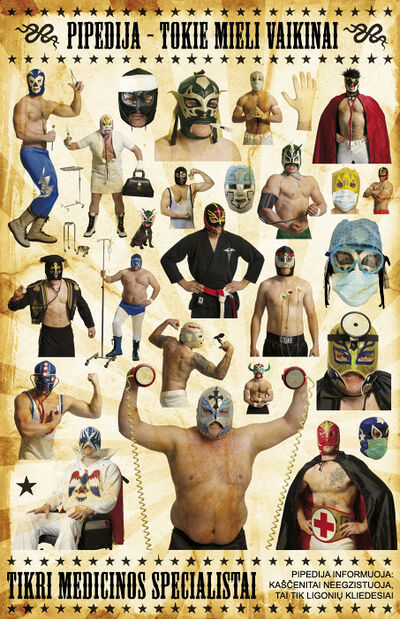 Would you like to receive some medical aid from pipedians?

Pipedia (or Pipedija) is a free, independent and mentally sick Lithuanian encyclopedia. It is like Wikipedia, but without any NPOV and as such, it is more objective and straight. Currently we have few pages in English but it's your choice to join us and become an English Pipedia admin. We are waiting for you! Start writing and editing right now!

Pipedija - actually sucks more, not about internets, but about psychos, and in Lithuanian language also, but small sections for English, Russian, Yiddish and Polish already exist. Only 2000 articles after half-a year existence. Now even more - over 5000 and will grow to over 9000 soon!

Mentioned in national TV, cited in magazines, well known in Lithuanian popular culture, Pipedija is standing somewhere between Wikipedia and Encyclopedia Dramatica. It has lots of real facts, but does not stand for Neutral Point of View. Instead it focuses into less known things, where some real facts can be misinterpreted as false, or some false bullshit can be got as real thing. And all those things are messed.

Main themes of Pipedija are politics, economy, mythology, some linguistic things, psychiatry and any internet memes. If you are free-minded English speaker, you are free to start any version of English Pipedija. And we promise you, you will become admin soon, and you get any support here.

The unsuccessful clone of ED somehow developed into some political and brainfucking wiki after some schizophrenic idiots gained administrator rights. And those call themselves "kaschenites", so whatever you find there - mostly about antipsychotics, electroconvulsive therapy and use of that on anybody. And of course on politicians.

So, few months after creation of this shitty site, local politicians started legal investigation, mostly on basis of illegal medical diagnosis on president of Lithuania Dalia Grybauskaite: Pipedija claimed that she's a lesbian and schizophrenic, so should be treated with electroconvulsive therapy. After some time investigation were stopped on the basis that Pipedija is fake humor site and aren't practitioners of medicine.

Shortly after that local massive campaign against Wikipedia started: Pipedija claimed that Lithuanian Wikipedian administrators are simply a group of bots and homosexuals. Few descriptive articles about Lithuanian Wikipedia administrators were created, so those tried to start edit and deletion wars in Pipedija. Silly and stupid wikipetans were unsuccessful in Pipedija. So one of them made a complaint and legal investigation against Pipedija began again. And failed again too on the same basis.

Wikipetans dislike Pipedija. Articles about Pipedija were deleted in Wikipedias several times. Those bastards don't like schizos. They should be treated with electroconvulsive therapy, chlorpromazine and urinotherapy in complex.

Get your Internet translator and try to surf Pipedija - as is! Start writing, and become admin! Get admin and get your own subdomain and do anything you want!